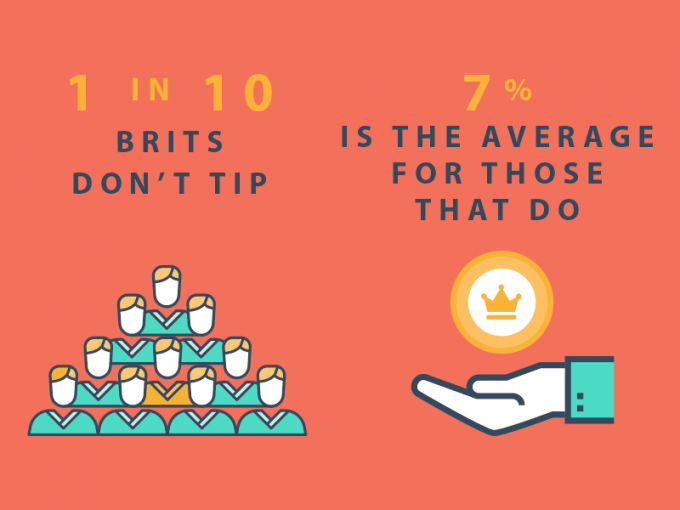 Proven tricks to get better tips

Servers are being short-changed as it’s revealed that one in ten brits don’t tip and those that do only leave, on average, 7% of the bill not the customary 12.5%. As a waiter, when you’ve worked hard to serve a table of customers it’s disheartening not to be left a decent tip. Numerous studies have proven that quality of service isn’t the only factor to influence people’s decision to tip. Don’t settle for satisfactory tips, use these proven tricks to earn more cash!

Introduce yourself
Starting right from the get go, a simple introduction will go a long way to helping you get better tips. An experiment conducted in southern California, by Kimberly Garrity and Douglas Degelman, proved that waiters could receive 8% more in tips by including their name in their introduction. Those who introduced themselves by name received an average tip of 23%, while those who omitted their name received an average tip of 15%.

Add a unique touch to the uniform
One study proved this idea using six waitresses at an upscale restaurant. The waitresses picked two nights out of four to wear flowers in their hair, with each choosing their own flower. It was proven that on the nights when they wore flowers in their hair their tips increased by 17%. Adding a unique touch doesn’t need to be limited to simply flowers, servers could choose to wear distinctive jewellery, scarves or pins. The unique piece simply needs to make them recognisable to their customers.

Repeat the order
Take the time to repeat the customer’s order back to them, even if you’ve written down the order perfectly or have an eidetic memory. Past research has shown that when an order is repeated 78% of customers left a tip at the end of the meal compared to the 52% of people who left a tip when the order wasn’t repeated. Repeating the order gives customers the assurance their meal is going to be correct and is a simple way to increase the likeness of receiving a tip.

Show those pearly whites
Giving a genuine smile is arguably one of the easiest ways to guarantee yourself a more generous tip. On more than one occasion research and studies have proven that waiters who smile while serving are more likely to be tipped and are more likely to receive higher tips. In June a survey was conducted which revealed 23% of diners will leave a bit extra if the server has a nice smile.

After dinner mints
A group of researchers used a control group to test the effects giving mints had on the size of the tip. When waiters placed mints on the table without mentioning them they received 3% more in tips, but when they gave mints and asked customers if they wanted a mint before leaving they received a 14% increase in tips. Other studies have proved this idea is not limited to mints and can be replicated with sweets or chocolates given with the bill.

Thank your customers
Although it’s typically the customers who thank their servers at the end of a meal, doing the opposite can increase your tips by 2%. The idea was tested in Pennsylvania by Bruce Rind and Prashant Bordia who asked a waitress to write “thank-you” on the bill before giving it to her customers. When the waitress wrote “thank-you” she received an average tip of 18% compared to an average tip of 16% when nothing was written on the bill. Two percent may not seem like a lot in the short run but when multiplied across all customers in a shift the short time it takes to write thank-you becomes very worth while.

Talk about the weather
Servers are encouraged to talk about the weather, but only when the forecast is positive, customers are not likely to give higher tips if they find out it is due to rain the next day. Sunny weather puts people in a good mood which increases the likeliness that they will leave a higher tip. Two researchers tested the theory in New Jersey where their results showed that a waitress received an average tip of 22.2% when she forecast good weather and an average tip of 18.7% when she made no forecast.

Can artificial intelligence really come to the aid of operators fighting the location war? →

Thank you for visiting our blog!